Forget cafe doors closing at four and a ticking off for a post 5pm espresso; it’s after dark when the booming caffeine culture really starts buzzing. It’s time to get initiated into some of the country’s coolest coffee clubs …

There aren’t many gigs where more coffee is drunk than beer, but what else would you expect when Edinburgh’s original speciality shop and roastery is hosting the party?

Artisan Roast’s popular espresso sessions don’t have a fixed timetable or venue; its three cafes across the city host live gigs when opportunities arise, while its Holy Garage pop-up transforms into a fully fledged festival stage when the Fringe comes to town.

‘The espresso sessions only became a “thing” about four years ago,’ explains Lukasz Gasiorowski of Artisan Roast, ‘but we’ve had live music in the evenings at our Broughton Street venue from the get-go, as a couple of members of the Scottish Chamber Orchestra were some of our first customers and used to play all the time.’

What started as impromptu acoustic sets has grown into a regular spot on the Edinburgh Festival Fringe line-up. ‘We had about 40 different artists on our stage last year, including bands and some amazing solo artists. And yes, the coffee was still rolling ’til the 4am shut down.

‘We host cupping sessions, espresso masterclasses and trips to the roastery on a regular basis, and these events appeal to the keen coffee connoisseur. Although at the live gigs we’ll often get people with no interest in coffee whatsoever wander in after hearing the music. They usually leave as a convert.’ 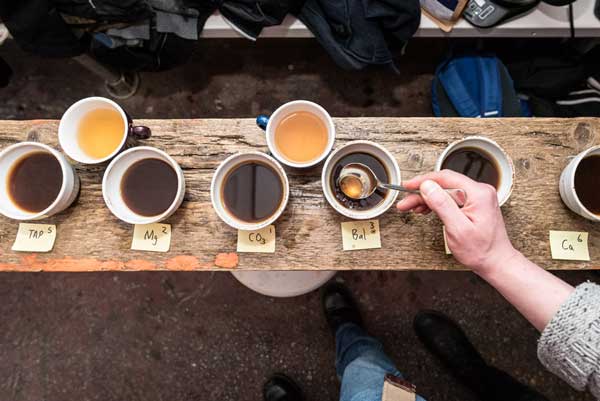 Pump up the jam

Rising from the ashes of the Glasgow Coffee Jam, the Scottish Coffee Jam was relaunched in 2016 as a monthly collective for the nation’s caffeine fiends.

‘The original Coffee Jam spawned lifelong friendships, job opportunities, a couple of business deals and even a romance,’ explains Ewan Osprey Allan, one of the guys behind the group. ‘But the event was small in scale and extremely nerdy – we once compared consistency of hand grinders.’

Now that the jam is back in action, the brew buffs behind the events have switched things up and are focusing on growing the coffee community with a line-up of inclusive events. Don’t sweat, diehards, there are still plenty of opportunities to get geeky. ‘I wanted to focus less on the intricate details of coffee and more on the people and the fun stuff,’ says Ewan.

‘After a couple of events it became clear that if you want to bring a group of coffee enthusiasts together, you just need to add beer!’ So far there have been a couple of cupping competitions, a latte art throwdown or two, the launch of the Disloyal Seven – a loyalty card encouraging Edinburgh’s coffee tourists to try new hangouts – and a welcome-to-the-neighbourhood party for Brew Lab when it opened its second shop.

‘Each event has been bigger than the last. We chat, drink and form friendships, irrespective of individual business interests,’ says Ewan. ‘The real crux of the events is the idea that in working together, we can improve Scotland’s coffee culture.’

Meanwhile in Glasgow, Todd Whiteford (pictured) of Glasgow’s Avenue Coffee Roasting Co. admits, ‘Coffee events can be pretty insular. There’s a fine line between encouraging people to take an interest in something pretty niche and making them feel part of what can be a tight gang.’

And it’s creating this inclusive environment for coffee education that Avenue is attempting through its bill of brew events in Scotland’s second city. ‘We hold brew, espresso and latte art classes all the time and we always encourage participants to come along to our informal latte art smackdowns on a Thursday night. First timers are usually a little nervous but it’s pretty chilled and a great first step into Glasgow’s coffee community,’ explains Todd.

‘Launching our first coffee beer with Fallen Brewing Co. and holding the Scottish premier of The Coffee Man film recently was a way to introduce the wider indie community to the speciality scene. We also included a discussion on what’s to come in Scottish coffee next year, which was eye opening.’